Communiqué: Communiqué Issued At The End Of The 5th Anniversary/Annual Congress Of Alaigbo Development Foundation (ADF) 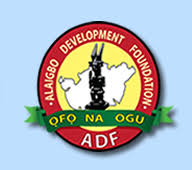 After critical and thorough deliberation on the state of the Nigerian Federation vis-à-vis the rapidly unfolding state of affairs in Alaigbo today, and doing all these in the light of the Mission ADF, the ADF Congress resolves as follows:

That the Igbo nation and her neighbours in Nigeria have degenerated into the status of occupied territories, arising from Nigeria’s false monolithic federalism and the conduct of the affairs of the Federation from a central Government controlled by one ethnic nationality, where political, economic, judicial and electoral rights of the Igbo Nation have been completely eroded and undermined. ADF, therefore, re-iterates its position that the only way to save Nigeria from imminent disintegration is to re-negotiate her possible continued existence as a political entity in conformity with the principles of self-determination, allowing each nationality freedom to control and pursue her political, economic and socio-cultural affairs and development as an Autonomous Region, and above all the fundamental right to decide whether to stay or opt out of such Federal arrangement.


ADF restates her avowed commitment to the struggle for the emancipation of Igboland in the face of the current threats of insecurity occasioned by the occupation of over 139 Communities in Alaigbo by the Federal Government-backed Armed Fulani Herdsmen/ ISWAP terrorist groups, whose activities have created immense destruction of lives and property of our people, created hardship, fear, tension and depredation all over Igboland.

ADF noted that while the suspension of RUGA project by the Federal Government of President Mohammadu Buhari seems to have slightly dampened tension and anger in Alaigbo, ADF observed that a mere suspension of the jihadist project, is a clear indication that the forces of Hegemony at the Federal level may have only made a tactical withdrawal to enable it fine-tune its strategy of territorial occupation of the South-East and South-South geopolitical zones of Nigeria. ADF, therefore , strongly urges the State Houses of Assembly in the seven States in the Igbo-speaking areas to take urgent steps to pass the Anti-Open Grazing and Ranching Development Bill which ADF has earlier  submitted for passage to them, ADF hereby commends the Abia State House of Assembly for being the only State that has passed the Bill.

Such a Law against Open Grazing in the Region, will surely empower the people through their Town Unions, Churches, Traditional Institutions to boldly join in defending the law and their property.

ADF resolves to continue to play active roles in promoting unity, understanding and collaboration between Igboland and the Niger –Delta Region and other Regions in the current Federation in pursuit of common interests in political solidarity for regional autonomy and genuine freedom , anchored on the principles of justice, equity and fair-play.

ADF regrets that the giant socio-economic developmental strides of the golden era in Igbo history, under the great Igbo leaders such as Dr. Nnamdi Azikiwe, Dr. Michael Okpara and Chief Sam Onunaka Mbakwe have been left to rot, due to lack of selfless political leadership among today’s political class. A typical example is the vast oil palm and cashew plantations across South East and South South.  Our Governors are called upon to make the revival and rehabilitation of these projects a top priority.

ADF continues to appeal to Igbo Businessmen and Entrepreneurs to continue to imbibe the AKU- RUO- ULO philosophy, by adopting aggressive pursuit of Investments at home in order to stem the tide of rural-urban migration and Youth unemployment in Alaigbo, with its attendant security challenges.  In the light of the current alarming instability of the Nigerian Federation, it is obvious that Igbo investment is safest in Igbo homeland.

ADF appeals to the state Governors in Alaigbo to take urgent steps to review their policies with respect to EASE OF DOING BUSINESS (EODB) in the Region, so as to create favourable environment for industrialization of Alaigbo and its transformation as an Economic Hub in the West African sub-region. ADF commends Enugu State for being the only South East state that improved in ranking in EODB in the state category in Nigeria.

ADF urges the South East Town Unions to continue to sustain their current tempo of positive consciousness, providing leadership in our Rural Communities, particularly with respect to security, peace and rural development.  The Traditional Institutions and all patriotic sons and daughters in our various communities are enjoined to empower, co-operate and collaborate with the Town Unions in the discharge of their responsibilities. The states and Local Governments in Alaigbo are hereby appealed to empower and support the Town unions in their domains.
ADF shall continue to collaborate with the Town Unions by way of research, training, strategic planning for the revitalization and development of Alaigbo.

ADF lends her weight to the raging call for boycott of cattle meat throughout Alaigbo in view of the revelations of gross disease-invested nature of the cattle by those who rear them. What is more, if Fulani cattle become the means of the annihilation of Alaigbo, we must say no to it for the sake of our survival. We must at the same time vigorously pursue the production of alternative source of protein for our citizens including the revival of the commercial production of native cow, goat and other domestic animals.