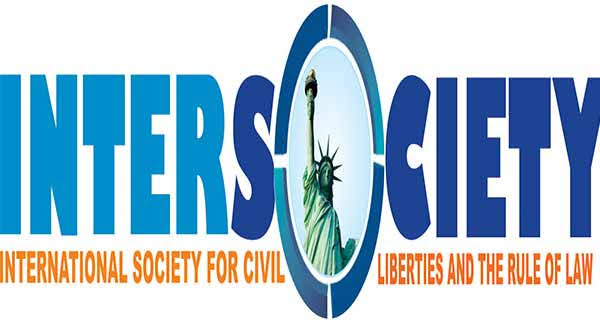 The staggering sum of N306b or $1b (at official exchange rate of about N306 per US$) had been paid at gunpoint in the past 50 months or between August 2015 and Oct 2019 by citizens of Southeast and South-south or old Eastern Nigeria including Delta and Edo States to estimated 600 military and 6,300 police roadblocks in the two regions”

The Int’l Society for Civil Liberties & Rule of Law, said today in a 4-page Executive Summary of its latest report. The Report and its Executive Summary was signed by Barristers Chidimma Undegbunam, Chinwe Umeche, Uju Igboeli and Ndidiamaka Bernard; and Emeka Umeagbalasi (a Criminologist & Graduate of Security Studies)-all principal officers of Intersociety.


The extra increase or additional N206b from our Dec 2018 research figure of N100b was as a result of extension of our field trip research to the South-south or Niger Delta Region where additional 400 military and 3000 police roadblocks were discovered and examined. This is in addition to further increase of military roadblocks in the Southeast from 150 and police roadblocks from 3000, as at Dec 2018, to 200 and 3,300 respectively. The research, therefore, covered the eleven States of Edo, Delta, Rivers, Akwa Ibom, Cross River, Bayelsa, Anambra, Abia, Enugu, Ebonyi and Imo, covering August 2015 to Oct 2019 or total of 50 months. In our Dec 2018 report, only the five Southeast States of Anambra, Abia, Ebonyi, Enugu and Imo were covered and examined.

While the 6,300 police roadblocks illicitly collected N250b from Easterners, the 600 military roadblocks criminally took home N56b. The report further showed that average of N6.4b was illicitly collected monthly, out of the N306b and N76b yearly in the said past four years and two months. The N250b illicitly took by the Police constitutes over 80% of the annual budget of the Force, which is N300b or over 20% annually in the past four years at annual average of N61.5b. The forceful payments and their illicit collection took place between August 2015 and Oct 2019 at various roadblocks manned by not less than 34,000 armed personnel of the Nigerian Army, Navy, Air Force and Nigeria Police Force stationed on old Eastern Roads and other public arenas in the two regions.

The special report was built on our 2018 report which concentrated on Southeast. The latest referenced report is strictly concentrated on military and police roadblock extortion in the Southeast and the South-south and did not include police, military and other security custody based extortionist practices including “bail fees” and commercialization of criminal investigations. The report also did not include aviation (airport’s arrival and departure wings), waterway, railway and border extortionist practices by concerned security personnel as well as roadway extortion by paramilitaries such as Federal Road Safety Corps, National Drug Law Enforcement Agency, Immigration and Customs Services and the Nigeria Security & Civil Defense Corps, etc.
Reasons For This Special Research Report.

This special report further exposes the real motives behind incessancy of military build-up and police siege in the two regions. It will be recalled that August 2015 marked the beginning of militarization and police siege of Southeast and South-south regions. This took place barely three months after Mr. Mohammad Buhari, a retired army major general was sworn in as Nigeria’s sixth elective or civilian president on 29th May 2015. The report is also in response to the proposed military operations in Eastern Nigeria, code named: “Operation Python Dance IV” and “Operation Crocodile Smile IV”, scheduled for 1st Nov to Christmas Eve of Dec 2019 as well as planned flooding of the two regions particularly the Southeast with alleged greater number of “Federal Road Tollgates”.  This is even as it is found that 70% of all Federal Roads in Eastern Nigeria are a death trap.

Militarization & Roadway Robbing Of Citizens Of Eastern Nigeria Must End:
The report restates the strong opposition by Intersociety to (a) militarization and police siege in Southeast and South-south, (b) targeted disruption through needless military operations (python dance and crocodile smile) and police siege, of socio-economic activities of the citizens of the two regions particularly disruption of their peaceful movements during Christmas and New Year festivities and deliberate entrapment on their fundamental rights to freedom of movement and religion, (c) seeming execution of ethnic and religious agenda in the two regions including deliberate gross lopsidedness in the location, composition, manning and management of key military and policing formations in the two regions, (d) brutal economic exploitation of the two regions and their peace loving and industrious people through series of unjustifiable and unwarranted war-like military and “internal security operations” and their attendant official roadway robberies and other corrupt practices.

Others are: (e) needless, militant and provocative embarkation of the so called “Army Python Dance IV” and “Crocodile Smile IV” in the two regions and (f) further threats to the lives and properties of the People of the two regions and militarization and radicalization of their psyches with “gun-culture mentalities, (g) planned flooding of the two regions with alleged greater number of Federal Tollgates and (g) acute neglect of the federal road, railway and aviation facilities in the two regions particularly the fact that 70% of the federal roads in the two regions are in deplorable, if not in acute deplorable state. Intersociety further seeks for total accountability for the N306b criminally collected at gun point from the peace loving and defenseless citizens of the Southeast and the South-south and their collectors or perpetrators as well as an end to the age long systematic and well oiled criminal practices.

Police Roadblocks In The South-south: Delta State, at average of N40, 000 per roadblock daily for 450 police roadblocks found in the State between August and Dec 2018 or in forty months, N21.6b was illicitly collected and between Jan and Oct 2019 (past ten months), at same N40, 000 for each of the 600 police roadblocks found in the State, N7.2b was added, bringing the total to N28.8b. In Edo State, same N28.8b was illicitly collected in the same period as well as in Rivers and Cross River States with N28.8b each. The above named States possess high number of extortionist items including high volume of trade and road transport commercial activities as well as movements of oil and gas products and associated roadblock extortion. They are more of ‘blue-collar’ than ‘white-collar’.

600 Military Roadblocks In Southeast & South-south Regions: The flat benchmark of N60, 000 per military roadblock daily was used. The N60, 000 illicit military toll benchmark used is strictly conservative and may likely raise to as much as N100, 000 per military roadblock daily which was why we added extra N7.5b as “dark figure” or a must include sum representing ‘untracked extortion”.

That is to say that in the past fifty months or between August 2015 and Oct 2019, at flat benchmark of N60, 000 per military roadblock daily, the 600 military roadblocks found in Southeast and South-south illicitly collected N36m per day, N1.08b per month and N48.6b in 50 months of August 2015 to Oct 2019. This further means that the 400 military roadblocks found in the South-south criminally became richer with total sum of N36b, collected between August 2015 and Oct 2019, at single sum of N60, 000 and total sum of N24m per roadblock daily and N720m per month. When added to N250b illicitly collected by the 6,300 police roadblocks in the two regions, the grand total comes to N306b or about $1b (using the official exchange rate of about N306 per US$).
Extortion, Ethnic & Religious Soldiering & Policing Fuel Extra Judicial Killings In Eastern Nigeria.

The combined effects of roadblock extortion, ethnic and religious soldiering and policing are also responsible for high rate of extra judicial killings, unlawful and extra legal executions, indiscriminate arrests, long captivity without trial, torture and disappearances. Cases of extra judicial killings and unlawful or extra legal executions are very high in the Southeast and the South-south particularly since August 2015. Multiple hundreds have fallen victims. Multiple hundreds have also been shot at close range, lacerated and incapacitated. Hundreds have disappeared without traces till date. Those tortured openly or in police and military custodies are in thousands; likewise those falling victim to indiscriminate arrests and long captivity without trial including victims of late night and leisure arena arrests.

As a matter of grounded statistics, dozens are killed at police and military roadblocks on monthly, if not weekly basis in Eastern Nigeria and thousands tortured including being inflicted with fragmented body wounds. Their killings or torture are strongly linked to collection at gunpoint of illicit roadblock tolls and refusal, inability or disagreements associated with them. In the area of ethnic and religious soldiering and policing, multiple hundreds have been shot and killed and multiple hundreds shot, lacerated and incapacitated. Hundreds have also been abducted and disappeared without traces till date. The victims include not less than 480 killed in Eastern Nigeria by the military and police between August 2015 and Sept 2017 and over 500 others shot, lacerated and incapacitated. Multiple hundreds have been unlawfully arrested and held in long captivity amidst torture, without trial. Most, if not all victims of the above highlighted crimes against humanity are unarmed and defenseless citizens of the South-south and the Southeast.
Techniques/Methods Used.

Modern techniques in social research were applied in the course of this research. They include sampling techniques such as random sampling, field trips, monitoring and evaluation. Media reports (literature review) and series of interviews with the victim population (i.e. private car owners and commercial transporters including drivers of long lorries, tippers, SHUTTLE and L-300 buses as well as tricycle and motorcycle riders, passengers and roadway property owners and other road users) were also used. In modern social research, too, rooms are allowed for approximations, estimations and projections. These were applied where necessary in the course of this special research report.

Above all, Intersociety has also made a name especially in the monitoring and report of police and military roadblock and other forms of roadway extortion in Nigeria particularly in the Southeast. This feat even predates our organization and had been on since early 2000s when Chair of Board of Intersociety, Emeka Umeagbalasi, now a Criminologist and Graduate of Security Studies with a post graduate specialty in Peace Studies & Conflict Resolution, held sway as Anambra State Chairman of the Civil Liberties Organization.

Umeagbalasi also earned a field experience when he assisted a foremost US based Human Rights group, the Human Rights Watch when it conducted its own field survey on “Police Corruption & Human Rights Violations in Nigeria”  in mid 2010, leading to its international report of 17th August 2010. That is to say that Emeka Umeagbalasi and Intersociety have monitored patterns and trends of military and police roadblock and other roadway extortion since 2010.

For full details of the 14-page special report, see the link here: http://intersociety-ng.org/phocadownload/2019/research-report-easterners-paid-n306b.pdf.To see the “sampling graphic tables” of our monitored and counted military and police roadblocks across the old Eastern Nigeria, see the link here: http://intersociety-ng.org/phocadownload/2019/sampling graphic.pdf.  To read our report of Dec 24, 2018 on roadblock extortion in the Southeast only, see the link here: https://www.premiumtimesng.com/news/headlines/302621-nigeria-security-forces-extort-n100-billion-in-southeast-in-three-years-report.html?fbclid=IwAR2SPQq7OUty3uYSASELBo3T7Cim3gXZ_Ue0uxUPBctGQfcsmWdYLWWlh6g

Attached are the Sampling Graphic Tables showing the number and locations of military and police roadblocks recently encountered and counted in Eastern Nigeria and photos of police officers extorting money from transporters and other road users on Eastern Roads and those of civilian agents hired and paid by the roadblock military personnel to collect criminal tolls for them at military checkpoints across the two regions. The photos were taken between Sept 2017 and Oct 2019.