Article: The Imperative Of “People’s Manifesto” 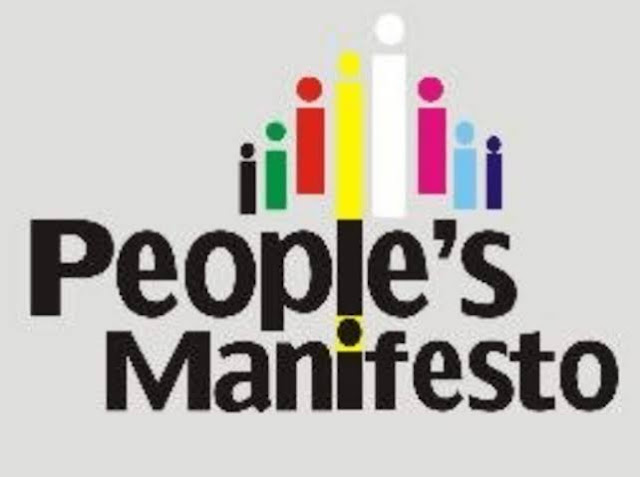 In the 20 months since I wrote “Drafting a people’s manifesto” and “Further notes on the people’s manifesto” (February/March, 2018), a sufficient number of significant things have happened and are happening in our country, Nigeria, in the Nigerian Left, to the Nigerian Left and in the world to raise the level of the urgency of the broad suggestion I alternately called “draft” and “notes”. The use of these terms to describe my attempt was a cautious way of indicating that I was not, and could not be, publishing a manifesto on behalf of the Nigerian Left. I could only suggest, propose and urge—not as a detached outsider, but as an active insider.


One possible manner of appearance of an authentic “people’s manifesto” is clear to me and I expressed it in my piece, “Preliminary notes on RevolutionNow” (August 15, 2019). What I said then can be re-stated, perhaps more clearly: Variants of RevolutionNow (August 5, 2019) may be attempted again and again until a particular attempt initiates a popular revolt which will simultaneously produce an authentic “people’s manifesto” and a substantial and effective unity of Left forces.

This follow-up piece is also not a manifesto, nor can it be. And it is not a call for revolution. The preceding paragraph is a statement of possibility informed by history and experience: distant, recent and current. Having said this we should also quickly add and emphasise that no serious Left formation or serious Left programme can be based—solely or even substantially—on the possibility of popular political eruptions.

You only have to recognize that possibility of spontaneous revolts while struggling, campaigning, mobilizing and organizing. History and experience have sufficiently shown us that the absence of this recognition of possibility and therefore, the need for “sideline” preparations for it—is the dominant reason for “betrayals” and “hijackings” of popular political upheavals when they occur. Put differently, “betrayals” and “hijackings” of popular revolts are indicators of the level of organization of the Left. Most of the present seemingly chronic and insurmountable obstacles in the path of Left unity will evaporate at a revolutionary conjuncture we may not be able to predict.

The “manifesto of the Nigerian people”, or the “people’s manifesto”, as indicated in an earlier piece, and now being strengthened, has a double character or two forms. In the first place, it is a Nigerian Left’s manifesto in the ordinary sense of the term, “manifesto”: a “public declaration of intentions, motives or views”, of what it intends to do, at the very least, if it comes to power or office.

In the second place, it is a Nigerian People’s Charter of Demands presented to the Nigerian state by the Nigerian Left, in the name of the Nigerian people (popular masses). Hence the people’s manifesto, or distillations from it, can be used for elections as (campaign platform) and for general popular struggle. History shows us that this dual character of the “people’s manifesto” lies at the roots of its popular acceptance, its power and its resilience. These are primary tests of a “people’s manifesto”.

The events or “things” to which I referred in the opening sentence of this piece include Elections 2019 and the recent Supreme Court’s effective “closure” of the exercise;  the steady decline of the state of the country’s physical infrastructure; the steady rise in the levels of unemployment, poverty and “insecurity”; the steady increase of the burden of living and reproducing life imposed by the Nigerian state on the masses of the Nigerian people; intensifying violent struggles within the ruling class for the control of political power and the economic surpluses extracted from the labour of the working and toiling masses—struggles in which the same masses are foot-soldiers and primary victims; and, generally, the steady decline of the quality of life of the broad masses of the Nigerian people - the “minimum wage” and its politics notwithstanding.

The significant events of the last 20 months also include the successful holding of a Conference of Marxism—resulting, among other things, in the establishment of a vibrant discussion platform for Marxists. This came as a qualitative addition to older but not-too-vibrant platforms for socialists and Leftists. Also appearing as a significant event is RevolutionNow and the current trial of its leader and a number of its lead partisans; the increasing fascist encroachment on the Nigerian people’s civil and democratic rights; the appearance of new popular-democratic platforms with credible leaderships—at the same time as the appearance of potentially-willing foot soldiers of full-scale fascism.

Finally, the significant events include the current world-wide popular protests in virtually all the continents and regions of the world. Here it is unnecessarily scholastic to start classifying the protests as “revolutionary”, “democratic”, “progressive”, “reactionary”, etc. The first task is to determine whether a protest is popular or not. Then identify and determine the “specific weight” of each ideological tendency in the protest. For the Left, that is where the lessons reside. Do not expect a “pure” protest.

The central message of the “people’s manifesto” at this point in history should be that the various negative and undesirable aspects of Nigeria’s current reality—as partially sketched above—can be arrested and reversed by the efforts of the Nigerian masses acting directly (that is, spontaneously), and as mobilized through their popular-democratic formations and coordinated by the Nigerian Left. But, then, who or what is the Nigerian Left? What are its antecedents and credentials? How does it intend to carry out its promise? How is its message, together with the description of the reality on which it is based, different from what the masses have been hearing over the years, since independence, from regime to regime?

These questions must be answered in the “people’s manifesto”. But before they are answered in the manifesto the Nigerian Left must answer them to itself. The latter is a condition for the former. And if it cannot answer anyone of them convincingly to itself, then it has to return to the drawing board. And in returning to the drawing-board, the identified three forms of struggle (direct, popular-democratic and Left) and their coordination should be more thoroughly interrogated. And remember: “Without a guiding organization the energy of the masses would dissipate like steam not enclosed in a piston box. But, nevertheless, what moves things is not the piston or the box, but the steam”.

Since the “people’s manifesto” will be a formal document it has to be appropriately structured, with a “table of contents”. The following six-point structure is an illustration: Who are the Nigerian Left? What country do Nigerian people now have?; What country do Nigerian people desire and deserve to have?; For a popular-democratic Nigeria: How the desirable will become the realizable; Immediate steps to be taken on coming to power or office; and Exhortation on the essential continuity of the struggle until victory, and beyond victory.

So, what should be done? I recall what I proposed about 10 months ago: “The next qualitative step (for the Nigerian Left) is not the formation of new parties or groups, or renewed attempts to register those already in existence, but the establishment of a Centre for coordination, ideological education, research, documentation and publicity.” But two questions now emerge: Can there be more than one Coordinating Centre? Yes, there can be. But I believe that the Nigerian Left is tired of the futility of multiplicity of formations. How many successful conferences on Marxism or similar efforts have we had in the last decade? And, can be there be more than one “people’s manifesto”? Yes, there can be. But how many Left declarations and platforms have we had in the last decade and how many have survived? From the Nigerian Left history now demands a qualitative step forward - to save the nation.