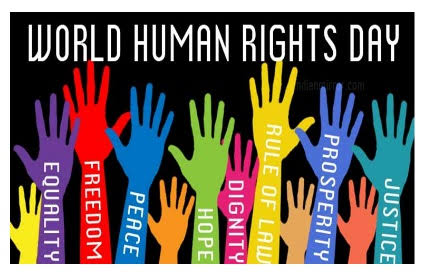 It’s another December 10, the global World Human  Rights Day made possible through the United Nations (UN) Document  known as The Universal Declaration of Human Rights (UDHR) ratified on this day in 1948.

The Universal Declaration of Human Rights (UDHR) was adopted by the UN General Assembly at the Palais de Chaillot in Paris three years after the end of World War II.  A product of 18 months' work by a drafting committee chaired by Mrs Eleanor Roosevelt, with members and advisers from all across the world.

The document which set a world standard for the protection of human rights and from which most countries of the world drew their constitutional provisions on the respect for the fundamental rights has been translated into more than 500 different international languages.

The 2019 celebration is being marked with the theme: “Youth Standing Up for Human Rights”.

A Statement by UN High Commissioner for Human Rights, Michelle Bachelet captured the essence of the theme succinctly when she said.

“We have a duty to ensure young people's voices are heard. The Universal Declaration of Human Rights, adopted by the UN General Assembly on 10 December 1948, was a firm commitment by States to protect the rights of everyone – and that includes making it possible for future generations to uphold human dignity, equality and rights.

“All human beings have a right to participate in decisions that have impact on their lives. In order to ensure more effective decision-making, and to build greater trust and harmony across their nations, the leaders of every society should be listening to their people – and acting in accordance with their needs and demands.

“Under our universal call to action "Stand Up for Human rights," we aim to celebrate the potential of youth as constructive agents of change, amplify their voices, and engage a broad range of global audiences in the promotion and protection of rights. The campaign, led by the Office of the High Commissioner for Human Rights  is designed to encourage, galvanise, and showcase how youth all over the world stand up for rights and against racism, hate speech, bullying, discrimination, and climate change, to name a few.

“We need to mobilise across the world – peacefully and powerfully – to advance a world of rights, dignity and choice for everyone. The decision-makers understood that vision very clearly in 1948. Do they understand it now? I urge world leaders to show true leadership and long-term vision and set aside narrow national political interests for the sake of everyone, including themselves and all their descendants.

Eleanor Roosevelt in her own indelible quote reminds us that the promotion of human rights should permeate even the smallest and dark places where people may not be heard or seen so quickly and boldly.  She asks and answers it this way:

“Where, after all, do universal human rights begin? In small places, close to home -- so close and so small that they cannot be seen on any maps of the world. [...] Unless these rights have meaning there, they have little meaning anywhere. Without concerted citizen action to uphold them close to home, we shall look in vain for progress in the larger world."

For us in Nigeria, this year’s theme focusing on the youth and standing up for human rights therefore serves as a reflection, an indictment, an introspection, a call to action and a pointer to the reality of the fact that the government has failed the youths while the youths also may not  have  lived up to their calling and status.   Mr. President called them “Lazy” the other day while in an international function.

While acknowledging the fact that there are so many youth highfliers excelling in their various endeavours in Nigeria and making the country proud across the globe, there is no hiding the fact that many have lost focus while fate, environment and family class have robbed many the opportunity of maximizing their potentials.

There is the ever  widening gap between the haves and the have-nots in Nigeria coupled with  class distinction where those who are in government always showcase the graduation ceremonies of their children in various ivy league universities abroad while their children’s counterparts and age mates here drop out of school for inability to pay outstanding fees in Nigerian universities.

Our youth are still the easy recruits for election thuggery and violence. They are the ones brandishing logs of woods with fiery eyes collecting ‘tolls’ for the oga who is the revenue contractor for the government in various states and local governments.

Most members of the political class want to permanently ensure that the youth remain at that lower rung of the ladder and never come up to challenge them or take over from them.  That is why they are given pittances and handouts at intervals, always served enough booze most weekends when ‘oga’ is at home and in those intoxicated state, they hail the ‘oga’ and ‘pray’ for him to always shine higher and assure him of being ready to die for him in case of any danger since he is the one who continues to remember them and make them happy.

We call on the politicians and those occupying political offices to stop abusing the youth. Youth empowerment is not distribution of motorcycles and tricycles.  It is not recruitment as vigilante operatives and security guards.  It is about giving them university education and employment opportunities.  It is about entrepreneurship and small scale industries. It is about agro economy and ICT training, certification and establishment among others.

The Nigerian youth must reinvent himself!  They must be involved in decision making process. They must also ask probing questions and hold governments accountable. They should not encourage vices or become willing tools for such. The youth must shine forth and direct energy into all things worthwhile, noble, diligent, edifying and excellent. Their rights must be respected while they must also join hands in promoting a rights-respected government and community.