Article: What Kind Of Democracy Do We Need In A New Nigeria? 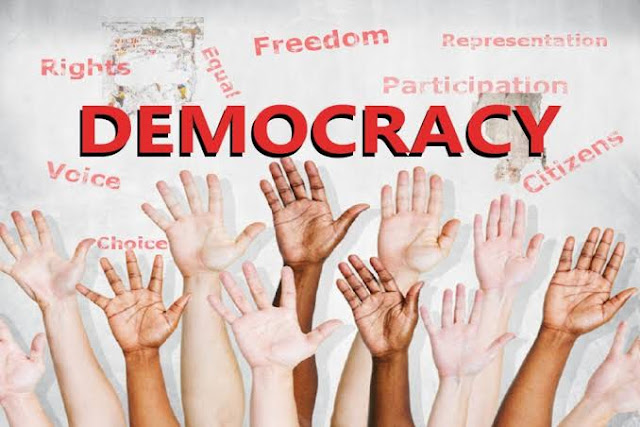 INTRODUCTION:
Today is Democracy Day in Nigeria and marks 21 years of unbroken civilian rule since the military left the stage in 1999. As at 1999, with 39 years of post-independence Nigeria, the military had ruled for about 30 years.  It is therefore worth celebrating unbroken period of civilian rule for over two decades. This is important because historically, there has been argument about what system of government will be good for people. Various systems have been experimented including autocracy, monarchy and democracy. But from experience, it has been recognized all over the world that democracy is the best form of government. Autocracy characterized by one individual making all important decisions and oligarchy which puts the government in the hands of an elite are less desirable when compared to democracy. Democracy is so important in the world today that it has become the driving force of development making many scholars to draw a nexus between democracy and development. Although different people put emphasis on different issues which they consider to be crucial to democracy, majority of people agree that liberal democracy contains some basic principles which include citizen participation; equality; political tolerance; accountability; transparency; regular, free and fair elections, economic freedom; control of the abuse of power; bill of rights; accepting the result of elections; human rights; multi-party system and the rule of law.  The idea of democracy is that majority of citizens take the decisions on who governs and the policies, programmes and projects to be implemented for the benefit of the people. But the challenge especially for the working people is that it has been recognized that liberal democracy is facing a crisis of legitimacy and declining confidence in political leaders and institutions necessitating the need for democratic renewal through increasing citizen participation. The process of governance has been hijacked by the political elite and the dividends of democracy do not go to the people.


CHALLENGES OF DEMOCRACY:
Since return to civilian rule, there has been a lot of efforts to deepen the democratic process to bring about the dividends of democracy to citizens. Efforts have been made to review the 1999 constitution which  was handed over by the departing military regime in 1999. There have been several attempts at electoral reform so that elections will reflect the true wishes and aspiration of citizens.

Women participation in politics have always been in the agenda since 1999 especially when one recalls that men started voting in Nigeria since 1923 but women voted in a general election for the first time in 1979. Civil society organising has increased in size  and depth. From a few human rights organisations during military rule, there are several civil society groups organising in different sectors including women, youth, health, education, children, democracy, disability etc. There have been efforts to make sure that democracy produces development. In fact, all of these culminated in the government signing the Open Government Partnership (OGP) in 2016 committing the people of Nigeria and the government to domestic reforms as a part of global movement for deepening democracy.

Despite the progress that has been made since return to civil rule in 1999, there are huge challenges that are threatening democratic consolidation. The 1999 constitution still has a lot of gaps and has not been fully adapted to the federal structure of Nigeria.

Experiences from the field of elections and judgements by courts indicate that there is the need for further electoral reform. Women participation in Nigeria is one of the worst in the world and fall far below the African average. There are threats to the civic space with intermittent attempts to enact laws that will restrict civil society organising and freedom of citizens. There are several examples of attempts to gag the press and punish outspoken citizens.
KIND OF DEMOCRACY NEEDED.

However, our experience since return to civil rule indicates that defending the democratic consolidation process can only succeed when a coalition of reformers work together to set agenda and advocate for issues from government, private sector, civil society and the media. The constitutional amendments and electoral reforms that have happened so far were made possible when these efforts led to some consensus in the country. The third term agenda of the Obasanjo regime was thwarted with such efforts.

In the recent past, it appears that the movement for reform is in retreat. Although there are many individual organisations working on these issues and many individuals active in the social media, synergy and co-ordination is completely absent and the momentum for change is waning.

The kind of democracy we need in Nigeria today must address the following issues:

Leadership selection process and election to ensure that good people with vision and leadership skills are elected at all levels.
Electoral reform to reduce monetisation of politics, violence, rigging of elections and thuggery from politics to encourage godly and decent people to participate.

Review of the 1999 Constitution (as amended) to reflect the federal structure of Nigeria and deal with various gaps in the constitution.
Engender a political system that will give space to the working people, women, youth and persons living with disability.
Promotion of transparency and accountability in all aspects of society including government, private sector and civil society.
Value re-orientation to operationalise the constitutional provision for the social order founded on the ideals of freedom, equality and justice; and national ethics of  discipline, integrity, dignity of labour, social justice, religious tolerance and patriotism.
A system for generating good policy ideas that is nationally owned and nationally driven.

Long term development strategy that will overhaul the politics, economy and social values as well as the public service.

THE WAY FORWARD:
The way forward for consolidating democracy in Nigeria is promoting citizen engagement and participation. It has been proven that the political elite of all countries are unwilling or unable to bring about fundamental changes to any society. Citizens must therefore organise to change the narrative. It must start with raising awareness of the condition and what needs to be done to bring about change. As citizens gather consciousness, they will come to realise that they are not helpless. They  must then go beyond abuse of leaders to map out concrete programmes to change the narrative. Citizens need to organise to change  the nature and character of the state as well as the conduct of politics, organisation of the economy and what is valued by society.

The kind of democracy we are practicing today is not the one that will deliver dividends of democracy to majority of Nigerians. Meanwhile, what needs to be done to change the narrative is known. If we wait for the political elite, we will wait till eternity. Nigerian citizens must take their destiny in their hands and change the narrative through awareness raising, consciousness building and organising for change. What we need urgently today is a coalition of reformers from government, private sector, civil society, academia and media to build a new Nigeria.