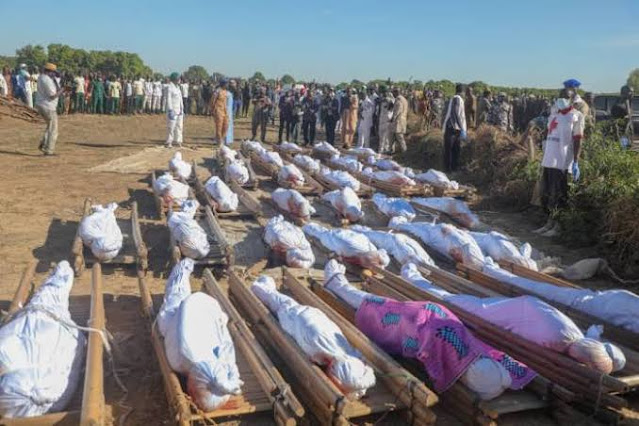 Killing by Boko Haram Terror Jihadists of UN estimated 110 civilians (Zabamari Massacre), comprising rice farmers and IDPs in Zarbamari and environs, located in Jere Local Government Area of Borno State is not only strongly condemned but also a clear case of War Crime demanding ICC intervention and int’l justice accountability. In the massacre, too, which took place on Sat, 28th Nov 2020, scores, particularly women, were reported to have been seriously injured and others went missing. The Nigerian Government must also sit up and contain the ferocious insurgency attacks on defenseless and vulnerable civilians in the country.

Intersociety remains strongly opposed to all forms of killings and maiming outside the law, whether perpetrated by state actors or non state actors. We are also strongly opposed to killing and maiming on the grounds of ethnicity and religion. In the latest Zabamari Massacre, most of the victims are most likely to be members of the Sunni Muslim Faith and a fraction of non Muslim others. For us at Intersociety, it does not matter which religion they belong for they are all members of the human family and share same biological traits with the entire community of human persons.

Their killing and maiming also become reprehensively condemned on account of them being defenseless and vulnerable civilians trapped in insurgency war zone. These explain why the Int’l Society for Civil Liberties & Rule of Law has since its formation in 2008 risen up strongly in defense of Shiite Muslims, Sunni Muslims, Christians and Traditional Religionists massacred or maimed outside the law as well as their worship properties burnt or destroyed. These we have all done free of charge; same way and manner our media friends publish our reports free of charge and our resource persons and members who freely donate to us their in-kind resources or expertise. We have also defended the marginalized members of the country’s security forces including members of the Traffic Warden Service of the Nigeria Police Force-where, till date and statutorily, no sworn member of the TWS of the NPF can rise above equivalent of “Police Inspector” and non statutorily “DST” or “Deputy Superintendent of Traffic”.

The latest Zabamari (Borno) massacre has again strengthened our serious concerns raised over the role of the Nigerian Armed Forces in the country’s counterinsurgency operations in the Northeast. The Nigerian Army, in particular, is apparently chasing shadows in the Northeast and has dissipated unnecessary energies in purely civil policing matters including targeting, shooting, killing and maiming of unarmed protesters and others going about their legitimate businesses. It is also saddening that the Nigerian Army applies ‘gallantry’ only when it comes to targeting, shooting and killing of defenseless and unarmed citizens wobbles and fumbles when it comes to containing genocidal terror activities of the country’s armed terror jihadists.

Like in Obigbo Army Massacre, our major grouse against Gov Nyesom Wike and the Army lies on the fact that “if intelligence reports at their disposal had revealed or identified IPOB elements as those behind the dastardly killing of some soldiers and police personnel as well as burning of police stations, the same intelligence should have  also disclosed to them their whereabouts for purpose of getting them arrested using detectives”. Instead, a ‘war-grade’ Army invasion and attacks and destructions that followed as well as tagging of every citizen with Igbo name as “IPOB member” were organized and atrociously executed. It is also not true that “soldiers are trained to kill”. Members of the Nigerian Army as part of the global armed forces are not trained to kill outside the law. Any killing of community of civilians or journalists or humanitarians or surrendered soldiers or armed opposition group members in situation of war is classified as “war crimes” while killing of unarmed and defenseless citizens outside war territory or under no situation of warfare is classified as “crimes against humanity”.