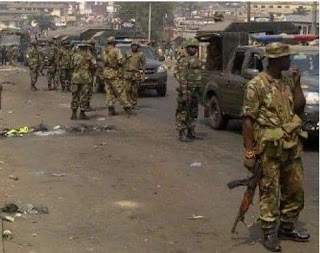 The Int’l Society for Civil Liberties & Rule of Law is deeply sad, worried and dismayed over the continuation of Army massacre operations in Obigbo and global silence trailing same. With our latest updates, the number of slain defenseless Igbo citizens of Obigbo residency and environs in Rivers State has now risen to at least 60 with between 90 and 100 others shot and deadly injured. Dozens have also been permanently disappeared and 200-300 others militarily abducted and held in custodies only known to the Nigerian Army. The Nigeria Police Force, Rivers State Command is also strongly believed to be holding not less than 100 persons. All the surviving victims being held alive by the Army and the Police are strongly believed to be undergoing torture and other harsh detention conditions. There are also no credible pieces of evidence showing that the sick and the injured detainees are receiving adequate medical treatments, raising serious fears of some dying in Army or Police custody or both.

We therefore strongly call for international intervention to stop the atrocious Army operations. The Nigerian Government and Nyesom Wike led Government of Rivers State must be prevailed upon to immediately withdraw the killer soldiers deployed to Obigbo and environs and all those currently held by the Army and the Nigeria Police Force in Rivers State and neighboring Abia State must be freed unconditionally or put on fair trial. The Obigbo massacre must not only be thoroughly investigated but also the perpetrators of the dastardly act including Major Gen Olu Irefin (GOC, 6 Division, Port Harcourt), Brig Gen SB Kumupayi (Commander, 14 Brigade, Ohafia) and Gov Nyesom Wike must be fished out at appropriate time and place and put on local and international trial for mass murder and crimes against property well as crimes against humanity.

We also wish to state boldly and factually that what is going on in Obigbo is far more devastating and three times murderous than the 20th night of Oct 2020 Lekki Tollgate Army shootings and killings targeted at gathered unarmed and defenseless protesters in Lagos State. In other words, the number of unarmed and defenseless citizens killed so far at Obigbo in Rivers State is at least three times higher than that of Lekki Tollgate in Lagos State.

While the Lekki Tollgate killings took the lives of about 20 persons, the number of persons so far killed in Obigbo has risen to at least 60, out of which 30 have been verified bodily or by names.

On the other hand, while the number of those shot and deadly injured in the Lekki Tollgate shootings is about 30, the number of those shot and deadly injured at Obigbo has risen to between 90 and 100, out of which 50 names have so far been identified. The ongoing Obigbo Army massacre has also resulted in permanent disappearances of dozens and 200-300 Army abductions. Unlike the Lekki Tollgate Army massacre where ‘ethnic cleansing’ was never intended even though a good number, if not majority of the dead activists were Igbo citizens; in Obigbo, the Army massacre there was and still is a full blown ‘ethnic cleansing’.

Apart from the fact that 98% of the dead and the shot and deadly injured victims in Obigbo are citizens of Igbo Nation, using “IPOB death code”, the Nigerian Army and other killer squads loyal to the Rivers State Government headed by Gov Nyeson Wike have also applied instant death and abduction code against every citizen with Igbo name or identity. In other words, any citizen with Igbo name or identity caught during their house breaking and house-to-house search and violence is instantly labeled “IPOB member” and either killed or abducted.

Therefore, going by our earlier promise of keeping the global community with verified updates over the ongoing Nigerian Army-Gov Nyesom Wike massacre operations in Obigbo, Rivers State; Intersociety has updated and verified 30 of the dead victims and 50 names of the shot and deadly injured in the massacre. We had in our first statement of 6th Nov 2020, released names of eight slain citizens and three unidentified others as well as 22 names of the shot and deadly injured others and made a promise to launch a detailed investigation into the massacre.

The Obigbo Army massacre, now bearing semblance of ‘ethnic cleansing’ and still ongoing, had occurred since 21st Oct 2020 following a curfew and thoughtless order issued same date by Gov Nyesom Wike, which the heavily Muslim controlled and secularity challenged Nigerian Army cashed in to levy human and property war targeting members of the Judeo-Christian Igbo population residing in the area; by killing them at will and looting and destroying their properties. Homes and areas occupied by Igbo natives have been targeted and are still being targeted by soldiers and-any person with Igbo identity is instantly made to run the high risk of losing his or her life or liberty and property.

The soldiers had In keeping with their new “IPOB death code”, abducted and presumably killed scores of unarmed and defenseless Igbo citizens living in the area-with multiple dozens, if not hundreds still held in the custodies of the 6 Division of the Nigerian Army located in Port Harcourt and Elele as well as its neighboring Asa-Ukwa military facilities in Abia State. They have been held in such facilities for past 28 days or since 21st Oct without being released or handed over to the Nigeria Police Force as required by law. Hundreds of homes have been broken into and still being broken into-with their Igbo occupants abducted at ungodly hours and their properties razed or destroyed or vandalized or burnt. It is credibly estimated that the Nigerian Army is presently holding not less than 200-300 of the arrested.

The heavy presence of soldiers also made it very difficult for relations of the slain to pick up their relatives’ bodies. Late Queen Nwazuo was among those shot and killed by military’s rain of bullets fired in different terminal directions. She was shot dead in front of her shop around noon of 23rd Oct 2020. She was killed at Umunchi Junction, Ehi Road in Obigbo. Among those abducted in their sleep by soldiers are Aneke Sunday and Onyema Christopher Onyeiro. While Citizen Aneke Sunday was abducted in his sleep around 2am in his residence around Market Road, Obigbo, Citizen Onyema Christopher Onyeiro and scores of his co residents were abducted around 11pm on 17th Nov 2020 at Isaiah Eletuo Street, Obigbo

In all these, the Government of Rivers State and authorities of the Nigerian Army (who have refused to speak and maintained silence of the graveyard on the massacre) are stopping at nothing to ensure that the truth concerning the massacre never sees the light of the day. Gov Wike apart from going about denying that “no killings took place at Obigbo”, has also been trying to divert the public attention by urging ‘all to condemn the killing of soldiers, police personnel and burning of police stations at Obigbo rather than wasting time seeking to investigate without evidence the Oyigbo incident”. Attempts by the NBA fact-finding committee to investigate the massacre have also been strongly resisted by the Gov and Government of Rivers State.