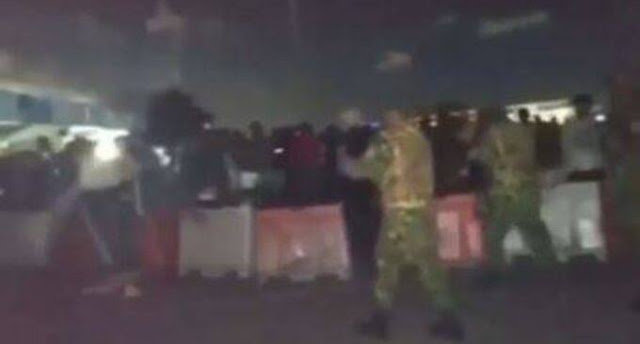 ( …names at least five dead victims of the Lekki Tollgate Army massacre that have been buried by their families).

Although lies told by the present Government of Nigeria and the country’s serving and former security chiefs since mid 2015 have damagingly ruined the country’s local and international image and reputation and will take decades to redeem, but the best way to handle serial liars in the country’s corridors of power is to consistently slap them with forensic statistics. ‘Forensic statistics’ are the researched or investigated and documented statistics gathered through natural and scientific methods following state actor or non state actor, or state backed non state actor grisly or ‘industrial scale’ human rights abuses and violations perpetrated in Nigeria or any part thereof.

Therefore, to do the above, activist Nigerians including rights and media activists, criminologists and lawyers must reduce their level of ‘synchronous’ and ‘asynchronous’ web chats and ‘debates-outside-facts’ and pay more attention to ‘investigative activism’ to unmask and document the atrocity crimes and their perpetrators which must include where, how and when the atrocity crimes were perpetrated, who perpetrated them and who and who were the victims. To be included are the videos and photos associated with the atrocity crimes which must include time, date, month and destination as well as eyewitnesses or survivors’ accounts or testimonies.

The lies told by the present Government of Nigeria and the country’s Army as well as heads of other security agencies have reached a maddening proportion, to the extent that even when the Lekki Army massacre has borne practical characteristics of incontrovertible culpability and soaked in natural and scientific facts, they are still denying. Lying against the dead is culturally abominable in Nigeria, yet they have unrepentantly lied and are still lying against them. They also parade themselves as “Honorables” and “Excellencies”, yet their common salutation is lying, to the extent that their lies have now gone to international borders.

Lies by the Nigerian Government and the country’s Army to the effect that ‘nobody was killed by soldiers at Lekki, except blank shots fired in the air that fainted two persons’, must have been falsely premised on their belief that all the dead corpses of those they killed were taken away by soldiers whereas contrary was the case. As a matter of fact, the Nigerian Army, Government of Lagos State and the lying expert Minister of Information have probated and reprobated repetitively on Lekki Army massacre. So far, they have told more than seven lies in connection with same massacre and are still lying.

Late Miss Lucy Oghenegueke Audu was a member of Lekki Tollgate EndSARS protest and among those shot and killed by soldiers at Lekki Tollgate. She was buried on Nov 3, 2020 in her family home at Igbere Street, Okpara Inland, Ethiope East Local Government Area of Delta State.

Late Chidiebere Umeojiako was involved in the EndSARS protest at Lekki Tollgate and among those shot and killed by soldiers. He was buried on 12th Nov 2020 in his family home at Umugama Village,  Umuchu Community in Aguata Local Government Area of Anambra State

Late Barth Ani was the son of a popular bookshop owner at Onitsha Main Market, dealing on ‘Catholic Stationeries’. His late son was also dealing on stationeries in Lagos State and was involved in EndSARS protest at Lekki Tollgate where he was among those shot and killed by soldiers. Late Barth Ani hailed from Akugo-Eze Community in Nkanu West Local Government Area of Enugu State.

Late Felix John Ormye was involved in EndSARS protest at Lekki Tollgate where he was among those shot and killed by soldiers. His remains were taken home by his family for burial on 12th Nov 2020. He hailed from Mbagun-Mbayongo in Adamgbe, Vandeikya Local Government Area of Benue State. These are just to mention but a few.

The “hoodlum theory” used by the Nigerian Army and Federal Government to attempt to escape culpability and justify their grisly crimes is laughable and dead on arrival. The two authorities have also failed to provide Nigerians and the int’l community with credible statistics showing the number of public and other strategic properties burnt or destroyed or looted in Lagos before 20th Oct 2020. That is to say that it was the Army massacre at Lekki Tollgate on 20th Oct 2020 that triggered off the violent dimension of the protests across the country. This was in addition to mayhem caused by Government allied Islamic hoodlums who engaged in wanton destruction of properties of law abiding citizens residing in their areas as well as killing of scores of EndSARS protesters and their supporters; with the same Government looking the other side. It is therefore correct to say that the Lekki Army massacre was a premeditated mass murder.

Finally, the courage and forensic expertise of the above named young activist and artist not only gladdens our heart at Intersociety, but also we are ready to offer her our automatic membership including her instant elevation to a top advocacy position after she must have been tutored on the workings of our Organization. We salute her courage and urge others to emulate her. Her role is undeniably internationally award winning.