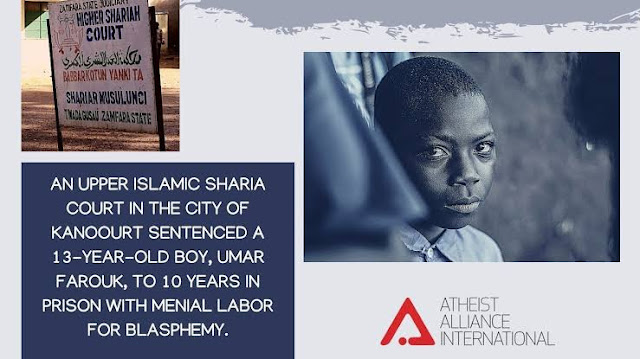 Many of us would still recall the story of the boy Omar Farouq.  On August 10, 2020, a Sharia court in the Hausawa Filin Hockey area of the Kano metropolis, Kano State, northern Nigeria, sentenced a 13-year old boy to 10 years in prison.  He had been accused, tried and found guilty of using disparaging language on “Allah”  during an argument with a friend.

To put this in proper perspective, Nigeria operates two major codes as far as its criminal law is concerned. In southern Nigeria, the criminal code which was derived from the United Kingdom during the colonial time remains operative with minor adjustments. Meanwhile, in the northern part of the country, the operative criminal laws are enshrined in the penal code from Sudan and believed to be in line with Islamic doctrines.

In the Northern part of Nigeria, 12 states also practice Sharia Law along with the nation’s secular laws, and Kano State is one of those states. Though the legal age at which someone can be held criminally responsible for alleged criminal activity is seven years and above throughout the federation, it would have been a different issue entirely if Farouq was accused of murder or house-breaking or burglary, convicted and sentenced as such. Even in such scenarios, it should be a juvenile trial where the ultimate aim would be rehabilitative and restorative — considering his age. But, he was tried, convicted, and sentenced for insulting God in a Sharia Court!

At the time the news of the sentencing of Umar Farouq broke, it drew condemnation from Nigerians and the International Community. he United Nations Children’s Fund, stated that,

They requested the Kano State Government to reverse the sentencing.

According to UNICEF, sentencing a 13-year-old to 10 years in prison “negates all core underlying principles of child rights and child justice in Nigeria – and by implication, Kano State being a signatory.  I cannot agree more.

Thankfully, on appeal, the 10 years sentence of Umar Farouq was overturned in January. According to the Appeal Court, the lower Court Judgment was a nullity foe “lack of credibility” and due to the age of the accused.

The above case is an example of some of the blatant human rights violations Nigerians continue to face.  Enjoying the most basic human rights seem like an illusion for millions of Nigerians. Many undiscovered Omar Farouqs are unjustly languishing in prisons all over the country. Most were not so lucky to have had the national or international condemnation from governments, rights groups, and highly placed individuals like in the case of the boy, Umar Farooq.

Human Rights abuses in all forms are a daily reality for many Nigerians; Men, Women, and Children alike, and only a fraction do get addressed. More needs to be done.  The fight to achieve justice for all continues and is non-negotiable.