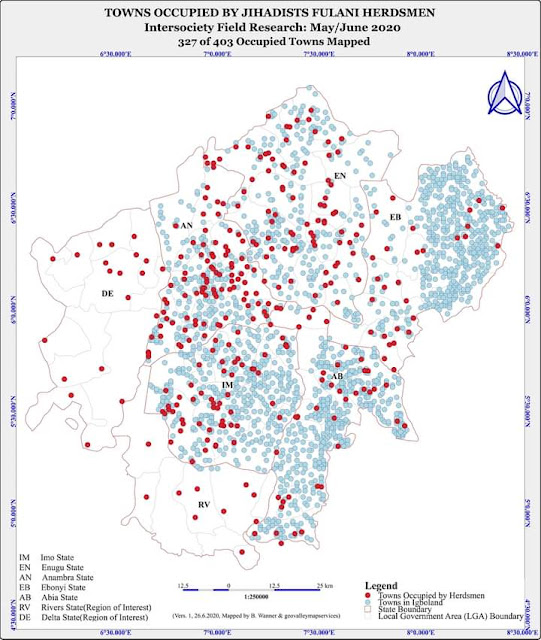 The number of Igbo communal locations in ten States of Anambra, Abia, Ebonyi, Enugu, Imo, Rivers, Delta, Edo, Benue and Kogi presently threatened or permanently occupied by armed and Government backed Jihadist Fulani Herdsmen has now risen to 700. This is according to new findings made by the International Society for Civil Liberties and Rule of Law, contained in a statement issued today by its principal officers: Emeka Umeagbalasi, Board Chair, Barr Chinwe Umeche, Head of Democracy and Good Governance, Barr Chidimma Evangeline Udegbunam, Head of Campaign and Publicity and Comrade Samuel Kamanyaoku, Head of Field Data Collection and Documentation.

Intersociety’s new findings show that Enugu State still tops the list with 117 communal locations, followed by Anambra with 101, Imo 68, Ebonyi 59 and Abia 52. In the outpost Igbo areas, there are at least 104 in ancestral Igbo locations and their neighbors in Benue State and not less than 50 in Kogi, 30 in Delta/Edo and 25 in Rivers State. Intersociety arrived at its latest figure by naming or citing not less than 556 locations. Fifty (50) others were indirectly mentioned and 100 categorized as ‘dark figures’ or those not captured or recorded; bulk of which was projected for Imo, Abia, Ebonyi and possibly Delta and Kogi States. In Benue and Kogi States, attacks including killings of Igbo Christian natives of the Communities of Igbo root and their neighbors by Jihadist Herdsmen have long become a routine and menacingly unchecked.

It must be remembered that the first attempt at aggregating and congregating the number of communal locations threatened or permanently occupied by Jihadist Fulani Herdsmen in Igbo Land was made in August 2019 by the Eastern Outlook Newspaper and leadership of the Alaigbo Development Foundation where it was reported that “Herdsmen had taken over 139 villages in Igbo Land: Enugu 56 spots, Anambra 23, Imo 17, Ebonyi 12, Abia seven, Delta 15 and Rivers nine”. In May 2020, Intersociety made its own findings built on the former and found in the end that the number had increased to 350 as at the same month and 400 in June 2020; with Enugu State taking 92 communal locations, Anambra 86, Imo 64, Abia 47, Ebonyi 41, Igbo Delta/Edo 22 and Igbo Rivers 15. The total figure of 400 as at June 2020 had included ‘dark figure’ of 32, bringing the total then to 400.

For purpose of clarity and clarification, the affected communal locations, now standing at 700, include those openly or remotely forced or threatened by Nigerian Government to play host to permanent settlement of the Jihadists or those under periodic  and in-boundary or out- boundary attacks including abduction and raping of their women and young girls, killings and destruction of their farmlands and crops; or those facing threats of invasion on flimsy allegations against them by Government or the Jihadists bordering on “killing of cows”, etc. As we have seen in the course of our field investigation, too, a Community can play host to more than one Jihadist Herdsmen attack or settlement including as much as four of such attacks or settlements.

For instance, the presence and permanent settlement by the armed Jihadist Fulani Herdsmen inside the Ogbaru Forest Swamps, which joins three Local Governments of Ogbaru, Idemmili North and Ekwusigo in Anambra State and their communities numbering over 40 is considered a serious threat to their lives, properties and faith in the hands of the Jihadists; meaning that any of the affected Communities in the area is vulnerable to Jihadist Herdsmen attacks including killings, sexual violence and destruction of farmlands and farm crops or threat of same. The recently retired Deputy Inspector General of Police, Celestine Okoye had also in March 2021 made a supportive and corroborative disclosure, saying that “there are 332 Fulani settlements in Southeast alone occupied by heavily armed (with AK-47 rifles and other sophisticated rifles) Fulani Herdsmen and those settlements are largely located in Ebonyi, Anambra, Enugu and Abia State with serious inroad into Imo State”.

50 Communal Locations: Ibaji LGA: Alagwu, Amabo, Ana-Apiti, Anaocha, Echeno, Iregu, Ika, Ikenye, Ikpogwu, Iyana and Odeke. In Ofu LGA, the Communities of Igbo root threatened by Jihadist Herders include Onicha-Igor and Ogbe-Onicha. In Idah LGA, they include Igala Ogba (Achikala Clan) and Achadu Oko, etc. In Olamaboro LGA, they include Ogwugwu, Ogbodo, Ogili, Ojeke, Okolo-Dodo, Omelewu, Onegbe and Orinago. There are also other micro Communities of Igbo nativity presently under Jihadist Fulani threats in Igalamela and Ofu Local Government Areas of the State. Total=30 Locations plus. It must be noted too that there are other micro Communities of Igbo nativity or ancestry located in other LGAs of the State presently under threats of Jihad and destruction of lives and properties by Jihadist Fulani Herdsmen.