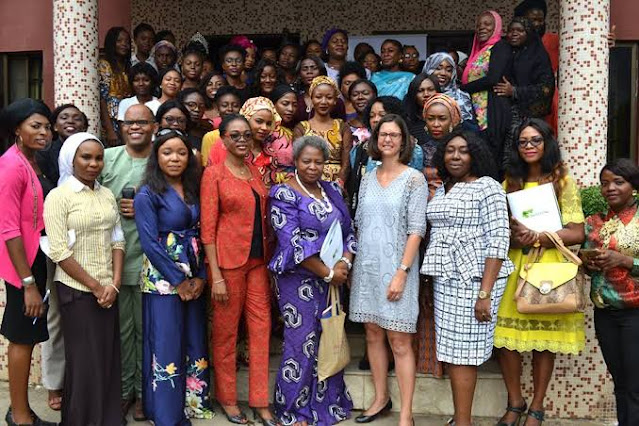 By Bassey Bassey and Oluwafunbi Alao

It is a fact that women face serious constraints compared to their male counterpart with regards to political participation in politics, governance and leadership and one of the most outstanding being access to financial resources to compete with men on an equal basis. Other constraints are influence of patriarchy, lack of support by political parties, religious beliefs, security and other targeted forms of gender based violence.

The road to occupying a political and elective position in Nigeria is through the ballot (popular vote), but this is the last lap of the electioneering marathon.

As more women, groups and international forces continue to mount pressure on government, members of parliament and political parties to create a system that engenders inclusion and participation of women in politics, there is need to also draw the attention of women within political party’s structures of the power within their reach and to maximize it to their advantage.

Within political party’s structures, there are limited positions available or delegated to women, however; there is an uncontested position allotted to women within the party structure and this position is also one of the most vibrant but has often been overlooked by many women politicians/aspirants and even some occupiers of the office are ignorant. The position is that of the "WOMAN LEADER" and Women’s wing.

For example; the People’s Democratic Party (PDP) within its constitution recognizes the role of women and has also created a women’s wing to be headed by “THE NATIONAL WOMAN LEADER”. This position is cascaded down to the ward level.  In Chapter Five of the party’s constitution; under functions of Officers it reads “There shall be a National Woman Leader, who shall be responsible for: (a) Mobilizing and organizing women; (b) Initiating and implementing strategic programmes and policies aimed at endearing the party to Nigerian women; and (c) Coordinating the activities of the Zonal and State Woman Leaders”.

Democratic elections everywhere in the world are won by popular vote and therefore requires that political parties and candidates mobilize electorates to vote either based on party ideology or candidate manifesto.

A lot of power resides with the mobilizer and we have witnessed in past elections how women leaders of political parties mobilize a critical mass of women to vote for their party. In the recently concluded American election, we saw how black women mobilized and voted for Joe Biden which led to his emergence, in the 2019 elections in Nigeria, women played significant role and contributed largely to the emergence of candidates as political office holders. In places where women are either not mobilized or refuse to vote for a candidate or political party, the outcomes are always in the negative.

Having understood the importance of a Woman leader as one of the party’s chief mobilizer and arrowhead within party structures, what role are female party members playing to decide who emerges as women leader, are they concerned about the ideologies these women leaders hold (are they feminist, patriarchal, sexist, liberal, progressives etc), are they educated or illiterates, are they considered to represent the different classes of women in Nigeria?

Beyond being machineries for the distribution of palliatives, rice, wrappers, salt and maggi; women leaders if they truly understand their powers can mobilize women and push for reforms within political parties that will ease the inclusion and participation of more women in politics. It is imperative to note that in some countries of the world, women are using their numbers to bargain, negotiate, demand and decline programmes that do not represent the interest of women.

In Mexico, the women’s wing of the National Action Party (PAN) became an effective platform for promoting women’s leadership positions. Its members advocated for increasing the pool of women candidates during elections. Also, draft policy documents are often reviewed from a gender-perspective by the women’s branch of the party.

Ireland’s Labour Party requires all women party members to join the women’s wing. This can help create a unified voice that allows the wing to speak from a stronger position.

The Area Councils elections in the Federal Capital Territory is a few months away, the race to Aso Rock will begin next year in Nigeria and at the other levels, how are women leaders organizing and what are they discussing at the moment?

It is evident that women’s wing and the woman leader in political parties can play a huge role in advancing women agenda within party’s structures.

Imagine a Nigeria, where political party’s women wing and women leaders are not only known for wearing uniform apparels and chanting praises of politicians for a few naira notes.

Imagine a Nigeria; where women and women leaders are setting agenda within Nigeria’s political ecosystem.

Imagine a Nigeria, where women leaders are mobilizing women based on shared commonalities, pains, interest and aspirations.

In conclusion, it is time for more advocacy and trainings to be targeted at women leaders of political parties at all levels (ward to national). These women must be made to come to realization that they are not pawns rather they are decision makers who shouldn’t be instructed but lobbied.

They must know the weight of the position they occupy and the change they can make if they refuse to be bought over, cajoled, intimidated or coerced.

Nigerian women while advocating for more room within the political field must look inward and become interested in who represents them as “woman leader”. An active woman leader can bring about monumental change for women, a figure head woman leader will only be good for mobilization and serve no interest.