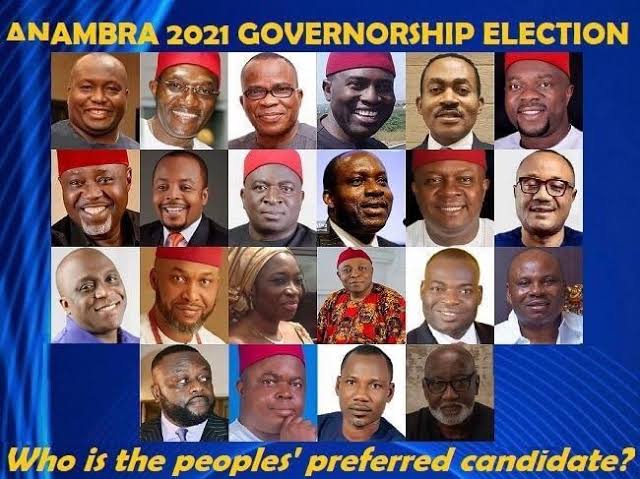 Anambra State is running at high speed and risk of becoming a ‘Nomadic Rainforest State’ if the 6th November 2021 Governorship Poll is scuttled by ‘sit-at-home’ or ghost street protest by the agitators; or massively rigged by state actor poll riggers, deployed security agencies and non state actor collaborators. These will be the end-product as a result of tensions and fears created by the activities of agitators including threats to scuttle the Poll with ‘sit-at-home’ as well as crude, unprofessional and poor handling styles of the Nigerian Government and its security agencies. By ‘a Nomadic Rainforest State’, it is act of State clandestinely approved massive movement or importation of jihadist Herdsmen and other jihadist mercenaries across Nigeria and outside the country into Anambra’s forests, bushes, farmlands and urban cities with intents to terrorize, kill, abduct, rape, loot, pillage, plunder and Islamize.

This occurs when on account of ‘Sit-at-Home’ or ‘ghost street’ protest by the agitators, all streets, public and private offices and social centers, commuters and commercial road, water and rail transportations and vehicle movements are grounded and deserted to the extent that not even INEC adhoc and substantive staffers and members of the National Youth Service Corps (NYSC), etc can move or be conveyed to the State’s 5,720 polling booths and 326 electoral ward collation centers. Under these conditions, too, members of the voting population and the general public are forced to stay indoors. The only persons capable of moving around will be security personnel who will be creating more tensions and fears. These, if allowed, will be a clear case of total breakdown of law and order; thereby making the conduct of the Poll an act of impossibility and declaration of ‘State-of-Emergency’ urgently possible and inexcusable.

Conditions For Massive Rigging Of The Poll

This occurs when tensions and fears generated by imposed ‘sit-at-home’ or threats of same and Government and its security agencies’ counter threats and poor handling of same are unaddressed and further heightened and escalated to the extent of forcing the general population especially the independent voters into panics, fears and withdrawals; thereby providing a field day for state actor poll riggers, joined by security agencies, INEC and non state actor collaborators. Massive rigging of the Anambra Governorship Poll will occur once there are semblances (scanty) of movements of persons and properties including public and commercial vehicles and commuters and opening of some public and private offices; all amidst tensions and fears forcing majority of the citizen population including independent and conscientious voters out of the streets and roads. The massive rigging is expected to arise from widespread scientific and manual doctoring of franchise papers and biometrics including massive uploading of procured PVCs as ‘validly cast votes’, thump-printing of ballot papers and hording of ‘FormEC8As’ and keeping them away from being used on Election Day as well as massive vote buying. The chief rigger, INEC, will cash in on Anambra’s 2.2m PVCs to manufacture, award, announce and declare bogus figures or “dead votes” and imposed a favored “Electoral Armed Robber” as “winner” and “Governor-Elect”.

The above was the highlights of the second segment of the ‘Enugu International Press Conference on Anambra Governorship Poll, Agitation for Self Determination and its Generated Insecurity in Eastern Nigeria’, held on Sunday, 24th October 2021 by Intersociety and joined by Southeast CLO and Southeast Based Rights and Democracy Coalition.

Anambra Governorship Election scheduled for 6th November 2021 is expertly found by Democracy and Good Governance Department of Intersociety to have no iota of negative impact on the ongoing self determination agitation. Rather, holding it and allowing voters to vote will raise more public consciousness and supports required and further serve as a litmus test for the agitation and emancipation of the Southeast. The Election, if popularly conducted and won will also ensure the safety of the electoral mandate of the majority of the Anambra voters and loyalty and allegiance of the winner to Anambra People as well as security and safety of their faiths, boundaries and territories. To allow the Election to be massively and scientifically rigged or to be stopped will be disastrously calamitous and placed and plunged the State into “a nomadic rainforest State”.

In the world over, issues of election and human rights are beyond borders, countries, boundaries, territories and cultures. This is because they are the axiom of the movement for statehood or self determination for regional autonomy or sustenance of existing statehoods. In other words, the founding or formation of any new statehood usually starts with Elections including ‘leadership election’, ‘plebiscite election’ or ‘referendum election’. The grave danger of opposition to Anambra Election by the agitators or their ‘comrades-at-large’ is its capacity to boomerang in future especially if there is a UN ordered referendum or plebiscite (i.e. on status of ‘Biafra’). That is to say that Nigerian Government can resort to same tactics including raising clandestine deadly forces and use of terror and brigandage to create a general atmosphere of tensions and fears so as to scare voters away and if majority votes are not secured, then quest for statehood or autonomy or confederacy or regionalism is dead. Therefore, the agitators are called upon to channel resources and energies against poll rigging and riggers and ensure that the Nov 6 Governorship Poll is popularly and credibly conducted and won.

History Of ‘Living Votes’ And ‘Dead Votes’ In Anambra

Since the return to civil rule in 1999, Anambra Governorship Poll had at one time or the other been determined by ‘living votes’ or ‘dead votes’. ‘Dead Votes’ arise as a result of low voters’ turnout and use of crooked Register of Voters. Votes are ‘dead’ to the extent that they do not emanate from independent and conscientious voters (‘living votes’), rather they are derived from massive uploading of procured Permanent Voters’ Cards or thump-printing of ballot papers or both using fictitious names and fraudulent biometrics. Voter apathy or low voters’ turnout encourages such rigging and this has been rearing its ugly heads in the State since 2003. In the April 2003 Governorship Poll, the State’s Voters’ Register was grossly tainted and filled with fictitious names and non living objects and symbols as “registered voters” and Dr. Chris Ngige was awarded over 1m “dead votes”. The Courts later set aside same and validated Peter Obi’s 235,000 ‘living votes’. This was out of the then “1.9m registered voters”. In the illegal Governorship Poll of April 2007, Emmanuel Nnamdi Uba was awarded 1.09m “dead votes” (60% of the so called “registered voters” and 85% of the so called “total votes cast”) from the State’s tainted Voters’ Register of over “1.84m registered voters” and out of “total voters’ turnout of 0.9m”.

In reality, not more than 200,000 voters came out to vote in the illegal voting exercise. In other words, the number of votes allocated to him (1.09m) surpassed the total number of the so called “voters’ turn out” (900,000). The Court later invalidated the shambolic poll on the ground that “the Poll ought not to have taken place”. Through several outcries and campaigns led by Intersociety and others, the Voters’ Register for Anambra State was cleaned up prior to 2011 General Election. But before then in Feb 2010 Governorship Poll, Peter Obi scored 97,833 ‘living votes’ out of 301, 232 total ‘living votes’ cast to emerge the second term winner of the Anambra Governorship Poll. The total registered voters then was 1.84m. In November 2013 Governorship Poll, William Obiano scored 180,173 ‘living votes’ to emerge the winner out of 425,254 total valid votes cast and 1.77m registered voters. In Nov 2017 Governorship Poll, William Obiano scored (mixture of ‘living’ and ‘dead votes’) 234,071 votes out of 422, 314 total votes cast and registered voters of 2.15m.

Despite deliberate threats of violence by politicians, army and police, Anambra voters can still vote unharmed. Voter proximity has fairly increased following creation of additional 1,100 polling units, totaling 5,720 polling booths from 4,608 used in the 2019 General Election. These threats would have also been of no significant effect on Anambra Voters had INEC lived up to its statutory and constitutional responsibilities by introducing a combination of manual and electronic voting. It is therefore the duty of religious and community leaders to get involved and ensure that independent and conscientious voters are encouraged to come out and vote. From the above analysis, therefore, the total number of valid and ‘living votes’ cast expected to arise from the Nov 6 Governorship Poll in Anambra State is 500,000 votes, out of which a credible winner will emerge. However, we are not going to be surprised to see a declaration by INEC of “1.5m total votes cast” and allocation of “1.2m votes to the winner”. This was the case in the massively rigged Anambra Governorship Poll of April 2003 and the illegal Anambra Governorship Poll of 14th April 2007. That is to say that once the total votes cast exceeds maximum of 500,000 votes in the 6th Nov 2021 Anambra Governorship Election, it is an express indication that the Governorship Poll has been massively rigged through massive uploading of procured PVCs using INEC’s ICT Department and thump-printing of ballot papers.

Anambra Will Be Flooded With Over 100,000 Security Agents And Armed Thugs To Rig The Poll

The announcement by the police and military authorities of massive deployment of security personnel in Anambra State is clearly a deliberate ploy to scare voters away so as to massively supervise the rigging of the Anambra Governorship Poll in favor of their candidate. A clear case in point was the announcement by the Inspector General of Police of ‘deployment of 34,587 personnel” and further deployment of additional 100 senior police officers among them are include “two DIGs, five AIGs, fourteen CPs, thirty-one DCPs and forty-eight ACPs”. This is in addition to over 150 senior police officers (SPs/CSPs to CPs) in the State manning over 100 different police formations. Just recently, the National Security Adviser, Retired Major General Babagana Monguno disclosed that the President has ordered massive deployment of security forces to Anambra State “even if it means overwhelming the Anambra electoral environment with security forces”. This further means that Anambra will be flooded with not less than 100,000-150,000 police, spy police and military personnel and those of the paramilitaries and they will possibly outnumber the voters and become Government hired ‘voters’ or ‘thump-printers’. These are nothing short of ‘turning Anambra Governorship Poll into a “lucrative bazaar” and a “rigging field”.

Board Chair, Int’l Society for Civil Liberties & Rule of Law