News Release: "Over 250,000 Voters Disenfranchised In Anambra Governorship Poll By INEC And Its ICT Department"-Intersociety 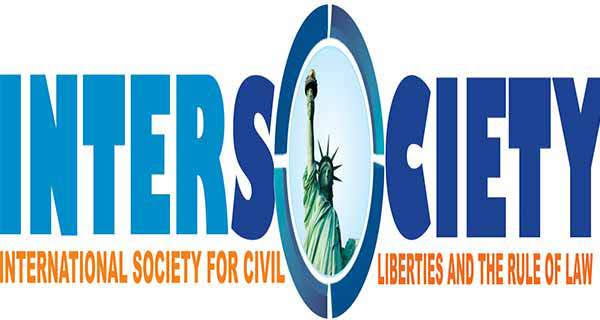 (…50,000 more than 200,000 voters chased away by agitators and security forces through threats and violence)

It is the informed position of the Int’l Society for Civil Liberties and Rule of Law that the Independent National Electoral Commission (INEC) is inescapably responsible for massive disenfranchisement of over 250,000 registered voters who also hold PVCs and who defied raging state actor and non state actor security threats and came out in their large numbers to cast their votes in the yesterday’s 6th November 2021 Anambra Governorship Election. The over 250,000 voters were disenfranchised by INEC and its ICT following widespread failure of the Commission’s voters’ capturing machines or “Bi-modal Voters’ Accreditation System or BVAS”. The magnitude of the INEC’s mass disenfranchisement of Anambra voters is historically unheard of and first of its kind in the history of elections in the State in particular and the country in general.

The INEC’s mass disenfranchisement affecting over 250,000 voters also outnumbers those chased away or forced out of the State by drafted security forces as well as the self determination agitators. While INEC and its ICT are responsible for disenfranchisement of over 250,000 voters with PVCs, security forces and agitators accounted for threat-disenfranchisement of over 200,000 others. Intersociety, a major voice and stakeholder in the Anambra State electoral processes since 2010, or two years after its formation, had consistently maintained that though the State, densely populated and atmospheric network friendly, has a towering voting population of over 2.5m including about 2.2m PVCs holders as at recent updates. The State’s actual voting population or voters capable of coming out to vote especially in the absence of state actor or non state actor security threats and other unsafe conditions is projected at 700,000-800,000.

However, this number is reduced to 200,000-300,000 voters with PVCs especially during the situation of insecurity and other unsafe conditions. The recording of maximum of 40% voter turnout especially during Governorship Polls and in situation of relative security and other safe conditions is technically blamed on the domination of the State’s adult population by “People of Blue-collar background or culture” or ‘Non People of the Book’ or those with ‘republican social setting’. We also have prior to the Nov 6 2021 Anambra Governorship Poll revisited the realities on the ground and found that the total number of voters with PVCs expected to come out to vote in the Poll was going to be maximum of 500,000, out of which a winner would emerge. In other words, approximated total voters of 700,000-800,000 voters with PVCs are normally expected to come out and cast their votes in the situation of territorial and psychological security and safety friendliness. That is to say that maximum of 500,000 voters with PVCs ought to have come out and voted in the Nov 6 2021 Anambra Governorship Election. Sadly, this was not the case as INEC and its ICT Department deliberately engineered and supervised the massive disenfranchisement of over 250,000 voters with PVCs who came out to vote but were disenfranchised by the Commission. This, the Commission masterminded and perpetrated by way of mass failure of the voters’ capturing machines, perpetrated in collusion with some compromised national network providers. In all, the total number of voters with PVCs in the State technically and physically disenfranchised or chased away by INEC and deployed security forces and agitators is 450,000-500,000 voters who also hold PVCs.

BVAS Failure Part Of Original Rigging Plans And Unable To Be Reversed At Eleventh Hour:

Contrary to INEC’s excuses, the mass failure was widely believed to have been part of the original rigging plans designed to be effected and perfected using flooded security forces to cause panics, tensions and fears across the State and cash in on same to massively rig or upload and authenticate the “crossover loads” into the Commission’s strong rooms. The eleventh hour irreversibility of the crookedly programmed or formatted BVAS failure had arisen following the sustained outcries and pressures from Anambra’s who-is-who that Anambra Governorship Poll results must be derived from the ‘living voters’ and must not be written on a table. Having programmed the BVAS machines for widespread failure, the INEC fell under intense pressures making it impossible to rewind and undo itself, except offering inexcusable excuses including blaming same on “glitches computer command misbehaviors”.

We have looked at and analyzed the dependent and the independent confirmed results from 14 Local Government Areas of the State including Aguata, Onitsha South, Onitsha North, Idemmili North, Idemmili South, Orumba South, Nnewi North, Nnewi South, Anambra East, Njikoka, Dunukofia, Anaocha, Ayamelum and Awka South and arrived at the fact that the total valid and ‘living votes’ cast in the fourteen LGAs is 169,747 or approximately 170,000, out of which the leading candidate in the Poll (Soludo of APGA) has scored 85,593. Having also carefully studied the performances of the voters in the fourteen Local Government Areas including seven out of the State’s ten Local Government Areas with largest number of registered voters, it is most likely safe to conclude that the maximum total votes cast expected from the remaining seven Local Government Areas is approximated at 60,000-70,000 or average of 10,000 votes from each of the seven LGAs. The leading candidate, if he consolidates his lead, may likely garner maximum of additional 35,000 or average of 5,000 votes from each of the seven LGAs. Therefore, the expected total votes cast from the State’s entire 21 LGAs will be in the neighborhood of 230,000-240,000 votes, while the winner’s total votes cast will be 110,000-120,000. Exception to the above is where shocking number of “dead votes” is successfully smuggled into INEC’s strong rooms and authenticated by the Commission. Chances of candidates pulling surprises by winning large number of “living votes” from the outstanding LGAs abound but very tough to be realized going by the present circumstances.

Anambra 2021 Governorship Poll And Its Winner To Record Lowest Number Of Votes Since Feb 2010:

The low number of voters and votes recorded in the Feb 2010 Governorship Poll has remained the lowest in the State since the April Governorship Poll of 1999. This was because of discovery of filling of the State’s Voters’ Register with many names of non indigenes as ‘registered voters of Anambra origin and residency”. Such names had included Prof Wole Soyinka who was located as ‘a registered voter in Ekwulummili in Nnewi South LGA of the State. Others found in the Register then investigated by Intersociety included dead persons like Gani Fawehinmi and other fictitious names and non living objects such as windows, human skulls, doors, hammers and so on. Upon our through investigation, it was found that only 35% or about 600,000 of the names in the Register, out of 1.9m filled in same as “registered voters” were real and this resulted in litigation by Intersociety at  Awka Division of the Federal High Court.  In the Feb 2010 Anambra Governorship Poll, the stakeholders rallied round and insisted on ‘one-man-one-vote’ leading to only 301,000 plus voters casting their votes and declaration of Peter Obi as the winner with 97,525 votes.

Therefore, going by the above regarding the Anambra 2021 Governorship Poll, the projected total ‘living votes’ cast of 230,000-240,000 (from the entire 21 LGAs including areas where voting has not taken place or did not fully take place) and winner’s total ‘living votes’ of 110,000-120,000 from the entire 21 LGAs will go down in the State’s history as the lowest in terms of the total votes cast and second lowest in terms of the winner’s total votes since Feb 2010 or since Nigeria returned to civil rule in near the middle of 1999.

For: Int’l Society for Civil Liberties and Rule of Law (Intersociety)