Special Report: "5,191 Christians Hacked To Death In Nigeria In 2021"-Intersociety 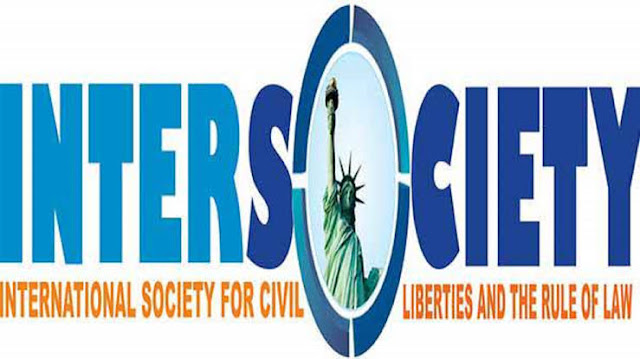 The Federal Republic of Nigeria and its governing authorities ended the year 2021 as the most hostile country in the world to practice Faith Freedom or Freedom of Worship and peacefully showcase Ethnic Identity. Nigeria also became “the Greatest Enemy of Christian Faith and its Faithful or Members in the World” and “a Country with the World’s Largest Christian Deaths for the Year 2021”-with hacking to death by Islamic radicals and Islamic radicalized members of the country’s security forces of no fewer than 5,191 Christians. Corroboratively and according to the Open Doors’ 2022 World Watch List on global killing of Christians’ index, “4,650 Christians were killed in Nigeria between Nov 2020 and Oct 2021, higher than 3,530 deaths recorded in the previous year (Oct 2019-Nov 2020) and 2500 Christians were abducted between Nov 2020 and Oct 2021 as against 900 abducted in the previous year”. The country had also in the past fifteen months or January 2021 to March 2022 recorded total Christian deaths of no fewer than 6006.

In the past thirteen years or July 2009 (Boko Haram Uprising) to March 2022, the Christian death tolls had risen to no fewer than 45,644, from 43,000 as at August 2021. Estimated 30,000 moderate and defenseless Muslims were also killed during the period by the country’s Jihadists dominated by indigenous and alien Fulani Herdsmen, Fulani Bandits and other jihadist pastoralists or mercenaries. Patterns and trends associated with killing of moderate and defenseless Muslims in the country especially in the past five years have been centered on ‘Muslim Fulani-Muslim Hausa rivalries in the Muslim dominant Northern States of Zamfara, Sokoto, Katsina, Kebbi and North and Central Kaduna while patterns and trends associated with their fractional killings dating back to 2009 are centered on ‘collateral and revenge killings’.  In all, 75,644 Nigerians have been killed in the past 13 years with Christians accounting for 45,644 deaths and moderate and defenseless Muslims accounting for 30,000 deaths.

The year 2021 ended disastrously for Christians and their sacred places of worship with killing of no fewer than 5,191 Christians including killing or abduction of at least 25 Christian clerics and attack or destruction of between 400 and 420 Churches and other Christian centers. Also not less than 3,800 Christians were abducted with scores, if not many feared killed in captivity by jihadists. That is to say that while 4.400 Christians were killed between Jan and Sept 2021, additional 700 others were killed between Oct and December 2021 and they included 231 Christian deaths perpetrated by Jihadist Fulani Herdsmen and Jihadist Fulani Bandits and about seventy killed by Boko Haram and ISWAP in Niger, Adamawa, Taraba, Kebbi and Borno States. No fewer than 400 defenseless Igbo civilian Christians were killed by security forces in “open” (street shootings and killings) and “closed” (custodial killings) quarters in Old Eastern Nigeria. The Jihadist Fulani Herdsmen/Bandits’ killings in Oct to Dec 2021 included “the Nasarawa Tiv Christian massacre of Dec 20, 2021” during which no fewer than 52 Christians were hacked to death.

No fewer than 6006 Christians have been hacked to death in the past 15 months or from January 2021 to March 2022 and in the first three months of 2022 or January to March, not less than 915 have been killed. The breakdown drawn from our recent investigation/review clearly indicates that the Christian parts of Niger State including Shiroro, Munya and Rafi Local Government Areas are the worst hit with 213 Christian deaths, followed by Southern Kaduna with 143 deaths, Taraba 130 deaths, Benue 72 deaths, Plateau 62 deaths, Ondo/Ogun 40 deaths, Kebbi 20 deaths, Enugu 20 deaths, Edo/Delta 15 deaths and Nasarawa, Kogi, Abia and Imo with 10 deaths each. Boko Haram and ISWAP, on their part, are believed to have killed no fewer than 60 Christians in the past three months or Jan to March 2022. The Nigerian security forces had also in the past three months accounted for not less than seventy Igbo civilian deaths. A “dark figure” of seventy Christian deaths was added to represent undetected others which grandly brings the total number of Christians killed for their Belief in the country in the past three months of 2022 to no fewer than 915. At least six Christian clerics were abducted or killed and not less than twenty Christian places of worship attacked or destroyed.

From findings made severally by Intersociety, not less than 3,800 Christians were abducted in Nigeria in 2021. This is out of estimated 6,000 total religious and tribal and their ransom related abductions and in the past three months of 2022, over 700 anti Christian abductions had taken place with Christian parts of Niger State topping the list with at least 400 abductions. Jihadist Fulani Herdsmen have also abducted no fewer than 30defenseless Igbo Christians in the past three months or January to March 2022 in Enugu, Abia and Imo States and killed not less than 20 in Isi-Uzo and Uzo-Uwani parts of Enugu State.

How Our Findings Are Made:

The Int’l Society for Civil Liberties and Rule of Law (Intersociety) has been monitoring, documenting and exposing the killing of Christians and burning or destruction of their sacred places of worship in Nigeria or any part thereof since 2010, two years after we were founded. Armed with corporate integrity, global respectability and statistics intellectualism and led by graduate experts in the fields of criminology, security studies, law, peace studies, conflict resolution, journalism and so on, our reports have been built on research and investigation, verified eyewitness and survived victims’ accounts, church bodies, victimized ethnic entities, verified media reports and those from local and international rights and research institutions, such as the Weekly Security Tracker of the Council on Foreign Relations. Others are Christian persecution watchdogs and minority Muslim groups, etc

Group Identities Of Those Killing Christians On The Ground Of Faith And Ethnic Belief:

The anti Christian butcheries in Nigeria have been investigated and found to be perpetrated mainly by Jihadist Fulani Herdsmen and their hired external counterparts. Other than the indigenous Jihadist Fulani Herdsmen and their pastoralist counterparts recruited from some African countries, the “Zamfara Bandits”, now called “Fulani Bandits” are also responsible for butchering of defenseless Christians. Other Christian lives’ hackers and Christian properties and worship centers’ burners or destroyers are Boko Haram, ISWAP, Ansaru and their foreign counterparts. The Muslim dominated and led security forces of Nigeria were also responsible for multiple hundreds of civilian Christian deaths in Igbo parts of the Old Eastern Nigeria in 2021 which have continued in the first three months of 2022.

The ethno-religious jihadists  responsible for hacking moderate and defenseless Muslims to death in the Northern Muslim States of Zamfara, Sokoto, Kebbi, Katsina and Birnin-Gwari and Igabi parts of Kaduna State are drawn from Fulani Bandits formed in Maradun part of Zamfara State in 2011 and who came into the limelight and embraced group violence in 2013. They were primarily raised against the indigenous Hausa communities and their Vigilante Group, known as “Yankasai”. Several investigations by Intersociety have further revealed that many victims of Muslim deaths in Zamfara, Sokoto, Katsina, Kebbi and northern Kaduna belong to indigenous Hausa Muslim communities and for economic, political and radical religious reasons (i.e. alliance for Jihad), the perpetrators of this type of violence have extended their mayhem to other parts of the North including members of other ethno-religious nationalities such as northern and non northern Christians and members of non Fulani Muslim Faith. The violence has since 2017 escalated and extended to Niger, Federal Capital Territory (Abuja), Adamawa, Taraba, Nasarawa, Kogi, Gombe and Bauchi States. The Fulani Bandits have also allied with Jihadist Fulani Herdsmen in occupying and terrorizing forests, bushes and farmlands and their owners in the Southern States of Edo, Ondo, Ogun, Delta and the North Central State of Benue.

Intersociety had in its report of 3rd Oct 2021 disclosed that Muslim Jihadists, comprising state actor and non state actor radical Islamists had between January and September 2021, hacked to death no fewer than 4,400 defenseless and unprotected Christians, in addition to killing or abduction of twenty Christian clerics and burning down or destruction of between 350 and 400 churches or Christian schools as well as abduction of about 3500 traveler and sedentary Christians. On average, 490 Christians were killed monthly and 16 on daily basis. The killing of Christians was further broken down to 2,540 killed by Jihadist Fulani Herdsmen and 1,963 killed by others including 600 killed by Jihadist Fulani Bandits majorly in Niger, Kebbi, Taraba, Adamawa and Southern Kaduna, about 680 killed by Boko Haram and ISWAP in Taraba, Adamawa, Niger, Kebbi, Yobe and Chibok and other Christian areas of Borno State. The Northern Muslim dominated and controlled security forces also accounted for at least 680 civilian Christian deaths majorly perpetrated in the Igbo parts of the Old Eastern Nigeria.

Intersociety had in its special int’l report of 4th August 2021 revealed that 43,000 Christians were hacked to death by jihadists and their collaborators in Nigeria in twelve years or July 2009 to August 2021) while estimated 18,500 others were disappeared without traces. Estimated total of 17,500 Churches and over 2000 Christian schools were attacked, ten million Northern Christians uprooted and six million forced to flee their homes to avoid being hacked to death by the jihadists. The Report further found that as much as 29,000 moderate and defenseless Muslims lost their lives, out of 72,000 total deaths perpetrated on ethno-religious grounds. Over 500 Christian communities in Northern Nigeria were also sacked and taken over by the Jihadists.