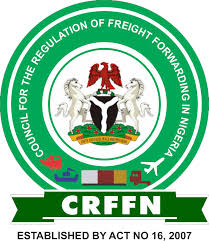 First, as a Nigeria freight forwarder, I am angry. Angry at the system for always doing things wrongly, thereby hampering my peace of mind and angry at myself for my inability to learn how to keep my mouth shut like others and live with the obnoxious system.

There is even this recent feeling building up in one to resign from being a Registered Freight Forwarder and do some other things with one's life.

How can one continue to explain to family members, friends, associates and acquaintances that majority of those who get the jobs and execute them at the ports are not Registered Freight Forwarders for example?

One is however mindful of the fact that at nearly 59 years of age, it would be a disservice to the subsector to abandon an endervour one have been involved in right from when one was in his 20s and in which one have garnered considerable expertise and experience.

This article however is actually about Nigeria freight forwarders and CRFFN representation, apologies for the digression.

When the tenure of the last session of the Governing Council expired, after some botched efforts at tenure elongation, the Minister of Transportation, whose duty it is to give "direction of a general nature" according to the establishment act regarding the election of a new session swung into action in that regard.

The first and fundamental act of illegality was thus enacted. The election was to be conducted by an illegal election committee.

This writer and a few others pointed out this fundamental breach(of the establishment act), but those we were pointing it out to were either contestants or sponsoring contestants. They were desperate to go into the Governing Council, not for any altruistic reasons, but to position to partake in the imminent "Practitioners Operating Fees(POF)" cash rain. They believed that they needed to be in the Minister's good book to be able to achieve this aim.

Seeing the lack of principles on the part of majority of the stakeholders, the Minister and his officials strolled from one illegality to another, culminating into the foisting of "consensus" Chairman and Vice-chairman on the Council, even when the establishment act clearly stated that these two leaders should emerge through election.

The stakeholders are currently in war mood, questioning why their representatives should opt for consensus instead of election without first clearing from them. The representatives, from their body language are not bothered.

The reality of the situation is that whether the stakeholders like it or not, these Governing Council members are the representatives of the Nigeria freight forwarders and do not need to further consult before taking any decisions at the Governing Council, except if they feel like and from the look of things, they would not feel like.

The other reality is that whatever decisions they take are binding on all freight forwarders in Nigeria and are supposed to be in their best interests.

The prayer point now should be that, they should not take or be made to take very damaging decisions in the next two years that they would be there.

Thank you all for your time.