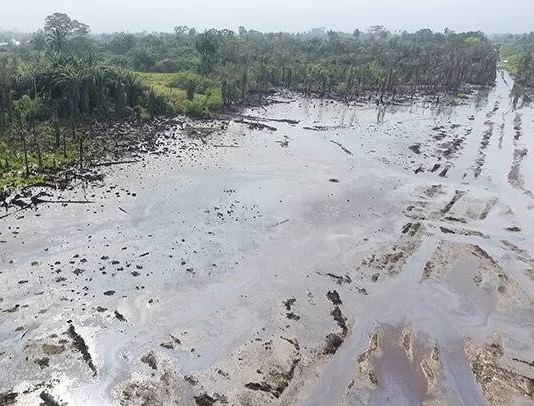 Members of YEAC-Nigeria’s grassroots monitors and advocacy team under the auspices of “One Million Youth Volunteers Network of Human Rights Defenders and Promoters in the Niger Delta” reported that the new spill occurred in Bodo in the late evening of Wednesday, August 24, 2022.

This new oil spill in Bodo Community is the second in the Month of August 2022 alone after there was a spill also reported by Advocacy Centre on August 2.

The August 2, 2022 oil spill from Shell’s facility which the standards of measurement was not known to the public was reported to have spilled only “five barrels” of oil into the environment, blamed on equipment failure after Joint Investigation Visit (JIV), Shell accepted responsibility for the spill and discussion for the payment of compensation and clean-up currently ongoing.

According to Advocacy Centre’s member in Bodo Community who reported this new oil spill in a WhatsApp message to the Executive Director, Fyneface Dumnamene Fyneface by 4:23AM (local time) on August 25, the new spill occurred on the Trans Niger Delta Pipeline (TNP) in Bodo City “… as a result of equipment”. He reported that “Another oil spill as a result of equipment failure on the TNP within Kol Taa area behind Saint Pius 10th College Bodo City, Gokana LGA, Rivers State. Please take note”.

While not concluding on the possible cause of the new oil spill in Bodo Community as reported by its member till Joint Investigation Visit (JIV) is carried out, YEAC-NIGERIA condemns this new oil spill.

The organization calls on the National Oil Spill Detection and Response Agency (NOSDRA), SPDC and other relevant authorities to immediately mobilize for a consultative meeting with the community leadership, carryout a well-representative Joint Investigation (JIV) visit that includes the media, Nongovernmental Organizations and other relevant stakeholders to determine and confirm the cause of the spill and then take appropriate steps to clamp the spill point, clean up the environment and pay adequate compensation to members of the community that have been impacted by the oil spill.

Advocacy Centre strongly frowns at the incessant oil spills in Bodo, other communities in Ogoni and across the Niger Delta region of Nigeria.

We also call on Shell and other concerned oil companies to use this opportunity of reduction in the pressure of crude oil transported through the Trans Niger Delta pipeline due to mass tapping by alleged crude oil thieves to overhaul the aged facility by replacing the outdated and obsolete pipes that are bursting and deflating like balloons to forestall further equipment failures and spilling of more crude oil into the fragile Niger Delta environment.

It would be recalled that similar oil spills in Bodo Community in 2008 among others made the community drag Royal Dutch Shell before a London High Court. Shell later opted for out of Court settlement, accepted responsibility for the spills and paid 55million Great Britain Pounds (GBP) compensation in 2015.

A component of the 2015 out-of-court settlement process also saw SPDC carrying out special environmental clean-up in Bodo Community but the exercise is being complicated by re-pollution through new oil spills from further equipment failures including the August 2 and August 24, 2022 oil spills among others.